On May 25th, 2018, Lithium Technologies CEO released an update on Klout. He began his statement with a friendly “hi” followed by this…

“I am writing to let you know that Lithium has made the decision to sunset the Klout service, effective May 25, 2018.”

He also mentioned that Klout is “not aligned” with their long-term strategy. It might be true, but other digital marketers and influencers came up with ideas why the company decided to shut it down. Dan Barker, a digital marketing consultant, seems to think that it has something to do with the General Data Protection Regulation (GDPR). Since the company stopped its services on Klout the same day GDPR took effect, Barker thinks that they might still be in the process of “finalizing their compliance steps.” Other than that, he also guessed that management overhead could bloat taking into account the changes they have to make. But, it can also be that the remaining value of Klout has become too low considering the GDPR-related tweaks.

In 2008, times were simple, and people are hung up on Klout. What it does is that it reviews your activity across social media platforms then assigns a number – your Klout score – to determine your social media influence. Klout checked the frequency of your posts and exchanges between online communities. It also tracked how often your posts received shares, comments, and likes. Afterward, you get a number between 1 and 100 to help you find out how influential you are in the social media sphere.
All of these things happened when Facebook became available to all users while Twitter was new in the game. Businesses and establishments incorporated Klout scores to improve their consumer experience. They would give room upgrades, discounts, and other perks for customers with high scores. It might be good news for those who earned their scores, but a lot of social media users and influencers were not fans of the concept.
For one, anyone can game the algorithm. Once you know the right keywords to use, which subjects to tweet about, and of course, when to tweet. Michelle Goodall, another social media consultant, did all of these to increase her Klout score. Unfortunately, it made her obsess and worried about her tweets. She shares, “It took the fun out of social media.” In pursuit of a high Klout score, her feed became “boring and one-dimensional.”
Then sometime in late 2012, Klout updated its algorithm which caused a lot of scores to fall. The scene outraged loyal fans while influencers turned their backs on its services. Klout was no longer a driving force in the digital landscape.

In 2014, Lithium Technologies acquired Klout for its “valuable artificial intelligence and machine-learning capabilities.” They also released a new update to help people stay relevant and produce the best quality of content. Though the Klout is still a mirror or gauge of popularity, it had additional features that support content creation, scheduling, and measuring.

Klout recognized the value of content quality when it comes to audience impact. They emphasized the importance of content by allowing users to create theirs on the app. The app offered to help users select content that generates interest in their followers. The Create tab enabled users to see not just random trending articles or posts, but posts that will most likely strike your friends’ and followers’ fancy. Klout’s new create content feature considered the people you are connected to, so the articles or posts you will see when you go to the Create tab targets not just you, but your audience as well.
You can help improve your content stream by giving a thumbs up or a thumbs down on some articles or posts that show up. Do not limit yourself to what you will initially see because you can also easily add topics to curate content.
To provide better perspective while consuming content on Klout, four tags are were available: On the Rise, which is content that is about to trend; Crowd Pleaser, which is content that people in your network are interested in; Hidden Gem, which is content that have not been seen yet by people in your network; and Hot off the Press, which is content that is recently published.

Content, no matter how good, will not be useful unless you share it for others as well. Once you have chosen the content you want to curate, you can share it with other people by posting it on your Facebook or Twitter. But you do not want to flood your own Facebook timeline or Twitter feed – hence, Klout had a scheduling feature so you can distribute the content you want to share.a
While going through the articles and posts while in Klout, it may be tempting to share every article that interests you. With Klout’s scheduling feature, you can do this without spamming your social networks.

With these additional features, the Klout score became more accurate as you share content and catch the interest of your audience. As a Klout user, the goal was to improve your Klout score. The Klout score remains unchanged – a number between 1 and 100 – and the higher your score is, the better.
With its years of experience working on developing topic graphs and social data, Klout provided a way for you to analyze your Klout activity. The Measure section allowed users to view the activity on each of your posts and how it affected your Klout score.

Additional features were on the horizon for users, particularly in the Measure section. Users were able to access click tracking, reach, and reaction metrics. Other tools geared towards content creation were available for Klout users.
If you were one of the many users of the highly popular Pinterest and Instagram, Klout was definitely in this league and aimed to have the ‘content’ version of such sites. The platform was a great place to get ideas for content especially since it generated insights on which content interests your audience. Also, these changes and new fea
UPDATE: Klout is Dead
tures placed more significance on the Klout score and painted a better picture of what the app is.

At some point, Klout must reach the end of its life cycle, and it did. Like other platforms and apps that changed the game of the digital scene, Klout had a good run. It improved businesses and changed how influencers managed their social media presence. It made people realize that their social media influence goes beyond numbers and algorithm. Most of all, it showed how innovation could dictate your value as long as you allow it.
From everyone who watched Klout grow from nothing into a million dollar technology, rest in peace. 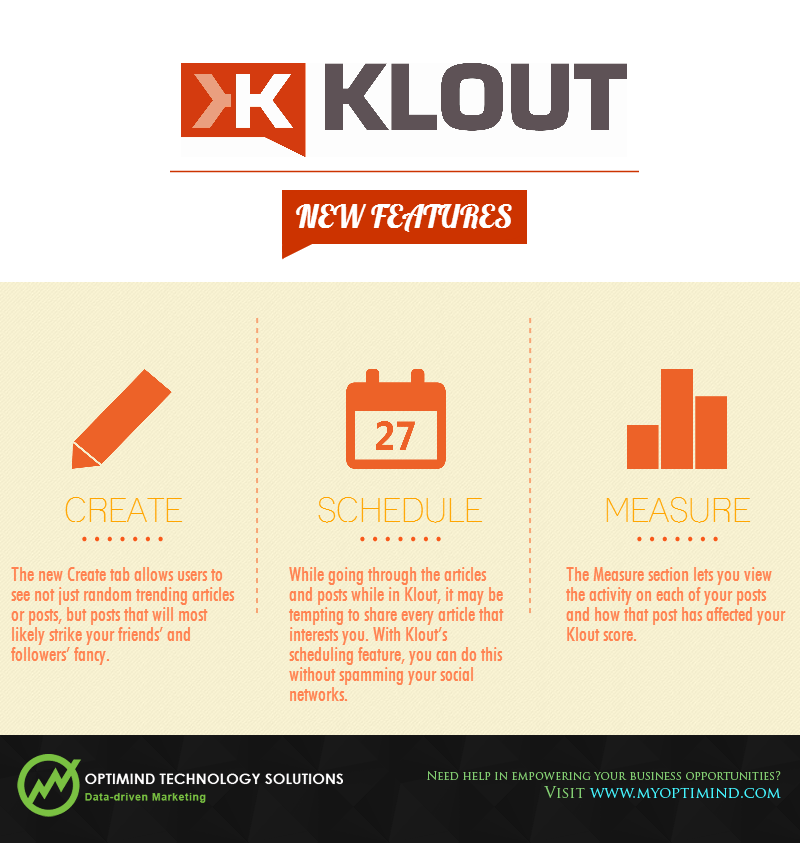 Editor’s Note: This article was originally published as “What are the new features of Klout?” on February 14, 2014.

13 UX Mistakes that Lead to Loss in Revenue